I can finally talk about this! I'm so grateful to be a part of this anthology! It's all about empowerment.

But first, a little backstory.

Emma Hibbs is a friend and fellow author/family member from Staccato Publishing. She's a talented young Australian living in England. While there, she learned about a young woman named Sophie Lancaster.

Sophie Lancaster was a twenty year old goth who was murdered just for the way she looked. Her and her boyfriend were accosted by a band of thugs who literally kicked their heads in. Sophie's boyfriend survived only because Sophie used her body to protect him after he lost consciousness. http://www.theguardian.com/uk/2008/aug/03/ukcrime.sophielancaster

Although it happened years ago, Emma recently learned of it, and expressed her horror and heartbreak on Facebook. I shared her emotions, and asked if there was anything I could do. Turns out there was something we could do, and this anthology is Emma's answer. I'm FEROCIOUSLY PROUD to be a part of it. Thank you Emma for inviting me!

I can't speak for Emma, or any of the other writers included in 'Dare to Shine', but I can tell you why this is so important to me.

I grew up in a town of 2000 people. The kids there were mostly preppies and jocks--There were precious few headbangers like me. Maybe seven or eight of us? I back-combed my hair as high as I could. I wore the most obnoxious jewelry, and eclectic clothing  I could find. I went everywhere with a Walkman blasting Metallica, Megadeth, Slayer and other stuff that would cauliflower your ears. And I was proud of it! I LOVED being completely different from everyone else. Still do.

People called me names--behind my back, and to my face. Headphone Girl. Fool. Weirdo. Space Cadet. Satanist. Adults would openly sneer at me and roll their eyes. But never, EVER did I think that anyone would try to kill me for the way I dressed. And it hurts to know that someone murdered Sophie Lancaster just for that reason. And that's why I'm in.

I can't give you a peek. I can't give you any excerpts--Ever. I wrote the 8000 word short story, but it belongs to S.O.P.H.I.E. now.  All rights and 100% profits belong to the foundation that bears Sophie Lancaster's name.  I feel so good about this, like I contributed something valuable to the world.

When the time comes, I will post a link for purchase, and I hope you all check it out. Remember, the proceeds will help fight bullying and you'll get some good reading on top of that.

Always be proud of who you are!
Posted by Thoeba at 7:53 PM 2 comments: Links to this post 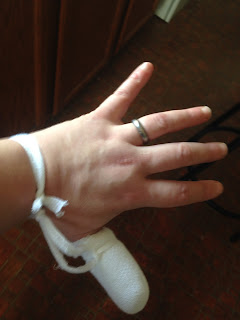 I feel so stupid right now. My thumb is encased in five miles of gauze, because I successfully sliced off a full centimeter of flesh off, with a sizable chunk of fingernail to go with it.

I was cutting kale into a small dice when it happened. I was carrying on a half-assed conversation with a co-worker about...Oh Hell...What were we talking about? Something work related. I was thinking about writing.

I have finished a sex scene for my new novel Elaina's Fate, and was wondering where exactly I start after that.

So I was thinking of writing, and babbling about work with my hand splayed out, not digits curled in like I know they should have been. We were out of coleslaw, and I was trying to hustle. So when I sliced my thumb, I did it with an aggressive chop borne of determined haste.

My agonized, startled yelp caused Dhodie to jump about three feet straight up in the air. He has the nerve to ask,: "Did you cut yourself?"

So we inspect my injured digit, and he turns grinch green and teeters slightly. I've seen worse. And it hurt worse than this. Actually, the powder they dumped on my cut to stop the bleeding hurt worse than the cut itself.

The bad news? I'm not allowed to push, pull or lift anything over eleven pounds. I can't do yardwork, peel anything for canning, or generally anything that might cause me to bleed again.

The good news? I type with only two fingers, so I can still write to my heart's content!
Posted by Thoeba at 7:15 PM 2 comments: Links to this post 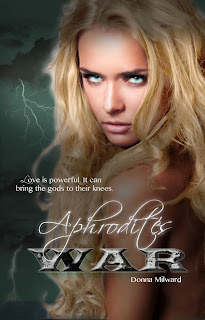 I just found my very first one star review for Aphrodite's War. I wasn't hurt or angry. Not at first. I was godsmacked and shocked. The reviewer hated it. Loathed it. Would give it zero stars if she could. She made it twenty percent in before giving up on it.

She was rather vague, but I figured out a few reasons why she didn't like it. She didn't like the multiple POVs, I'm guessing, and didn't like my voice. I also guessing the sex scene between Ares and Strife turned her off. She also found a glaring mistake in the way I portrayed the relationship between Aphrodite and Hermes--definitely my fault.

The part that hurt was how she said it seemed like a bad knock off of a series she'd already read. She didn't say which author or series, so I've got no idea who she's talking about. It bothers me because I try to write original material, and HATE the idea that I may have copied someone else. I wouldn't have written the book if I'd known. Why would I regurgitate something that's already been done?

Now I'm working on a novella based in the time of the Funnelbeakers. I'm six chapters in, and I realize that despite my research, I know very little about them. I went to write about a feast, and discovered I don't know what they eat. I googled it, but I'm shaken with the idea that I might be wrong, and my novella will be filled with holes and inaccuracies. I tell myself I'm not writing a historical document, that my readers are more interested in the story, but shouldn't I be as authentic as possible?

I wasn't going to blog about this incident at all, but it's giving me Writer's Block. I'm afraid to write.

My friend Kathy pointed out that this is a rite of passage for a writer, and she's right. EVERYONE gets bad reviews, no one is that good that everyone loves them. My friend Delvina told me this one star is validating. One can't have only four and five star reviews all the time, because they look 'planted'. She's right. I think I'd be suspicious too if every single review I saw for a book ranted about how great it was. This blogger probably did me a little favor with her blunt honesty. Actually, I appreciate her honesty. Strangely glad she didn't fake anything, even if it stings.

So I'm venting here, on my blog. Now that I have it off my chest, I'm going to write that feast scene. I'm going to describe the fire-roasted deer, pig and mallard. I'm going to comment on the rich bowls of barley and carrot and the charred crabapples and hazelnuts. They're going to drink copious amounts of beer from clay bowls made by Agneta. I WILL keep writing. After all, this is just the first draft. I can always fix it later.
Posted by Thoeba at 9:35 PM 7 comments: Links to this post 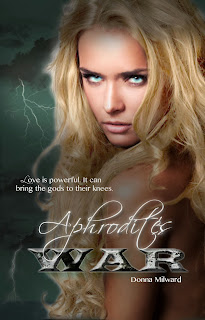 I'm sitting outside, having a smoke break when I am joined by a young friend who works at the restaurant next door to mine. We usually talk shop, his upcoming wedding and Pinterest. He tells me, after eight years, he's leaving his job. Eeeek! "I'll miss you!" I tell him. "I'll miss you too!" he says back. We decide we should stay in touch and exchange cell phone numbers (And first names, I might add. I chatted with this guy for four months and we never knew each other's names.) and I tell him I'll give him one of my bookmarks. I can tell he doesn't know what that actually means.

Later that day, I send him a text to confirm we have the right numbers. I tell him I got sent home early, but it's okay because I've got edits to do. He says "Bummer. Edits arn't fun." And I wonder if he's trying to be funny.

Today I give him a bookmark and tell him the picture is the cover of my second novel, Aphrodite's War. He asks what it's about. I give him a short run down....failing to tell him it's a love story and that I write paranormal romance, but it doesn't matter because he responds with a deadpan-- "Cool...Didn't know that about you." As if it anything BUT. I think I muttered something about marketing being a bitch and having trouble self-promoting.

That's the trouble with being a writer. I'll bet my friend is thinking, "Oh God, ANOTHER one?" Writer is the new 'rock star'. Everyone wants to be a writer.

That's why it's so hard to make a living at it. I'm just one in a couple million, It doesn't matter how hard I work, there are millions of people just like me. We all want to tell a story. And self-publishing has made it that much easier.

I think this is funny. It's happened that people tell me I should write THEIR story. One guy insisted he was so interesting, I'd make a lot more money writing his family history than I could ever make writing fiction of ANY kind.

It's weird to be on the other side, where being a writer might make people find me tedious. I don't think I've ever experienced that before. Interesting. Good thing I'm an armadillo.
Posted by Thoeba at 10:15 PM 2 comments: Links to this post