I promised a contest, and here it is. This is for everyone, but especially those of you who would rather have a second Halloween than Valentine's Day.

Chasing Monsters is a love story, sure. But I don't know about you, but I like a little more than that in the books I read and write. I certainly don't object to some violence and creepiness. If that's you too, than maybe you want to participate in this contest. *This is a private contest done by the author, and is in no way endorsed by Facebook, Twitter, LinkedIn or any other social media site.*

Here are the rules:

1. Entrants must post or share links involving Chasing Monsters or anything else to do with Donna Milward, Author. Don't forget to tag me so I can see you. Here's a couple of ideas:Donna Milward's Author page on Amazon  Donna Milward Facebook page

2. Do it often. Every post counts as an entry. The most posts wins. First, second, and third prize will be determined by who has the most entries. In the event of a tie, BOTH parties will be awarded the same prize.

This contest runs until February 28th, 2017, and winners will be announced March 1st, 2017. At this time, I will contact the winners for addresses.

IF the winner is outside North America, the novels will be given in a Kindle version. Other prizes will be sent by regular mail.

My goal here is to expose Chasing Monsters to as many people as possible, and although I intend to expand my marketing, I'm counting on you to start me off.  Thanks in advance, and I wish us all luck! 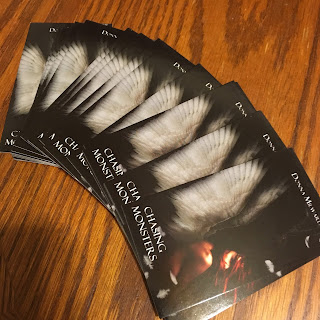 And why do you want this book? Here's an excerpt: 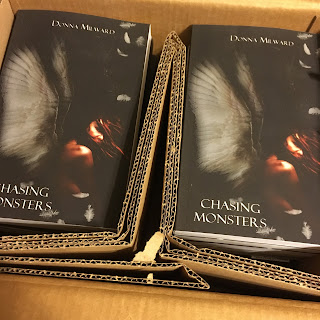 Noelle’s shriek lodged in her throat like a half-chewed chunk of chicken. Hiding in a pile were a pair of glowing crimson eyes.
Rodent’s eyes shone like that in certain lights, right? But these appeared much too large, and they seemed to radiate, like embers, not reflect.
Dried grass tumbled as the creature rose to tower above her. Bat-like wings created Halloween shadows on the walls until they filled the tiny room. Teeth the length of her fingers lined an impossibly long mouth. It was leathery and black, and had short horns on its head and shoulders. Those scarlet eyes were larger than the palms of her hands.
She took a step backward, and a talon shot forward to grasp her arm. Her phone spilled from her fingers to the ground. Noelle barely registered the clatter as it smashed on the cement below.
The beast pulled her close. She squirmed from its searing touch until her sleeve ripped. The heat from its breath flushed her face. A bead of sweat trickled from her temple. It pressed a gnarled hand to its chest. “Nequam.”
“Get away from me!” Noelle attempted to run. The thing reached out, grabbed her again. She emptied her lungs in a scream of panic.

Posted by Thoeba at 7:36 AM No comments: Links to this post

“Whoever fights monsters should see to it that in the process he does not become a monster. And when you look long into an abyss, the abyss also looks into you.” Friedrich Nietzsche

It's official. CHASING MONSTERS has been released!! To be honest, I'm more relieved than excited. It doesn't even feel real. Such a long and exhausting brain birth. I couldn't give up though. WOULDN'T give up. Not only do I love this novel, but I made a promise to publish it, and dedicate it to Gary Larsen.

If you follow this blog, you'll recognize the name. He was the paranormal investigator who asked if he could be in my book, but passed away before I finished it. I miss him. Everyone who knew him does, especially his friends at Edmonton Paranormal. I hope his spirit is proud, and he likes the character of 'Joey'.

I'm pleased to tell you CHASING MONSTERS is available in both Kindle and paperback from Amazon, and is also part of the Kindle Unlimited program. Currently, the paperback is unavailable in Canada, but give it time. Createspace tells me it can take up to 30 days to go up, but that it can be purchased here: To order a paperback copy of CHASING MONSTERS.  In the meantime, Kindle versions are available exclusively at Amazon. The above link is the US link, here's the Canadian link: Donna Milward at amazon.ca

And here is the back blurb:

Noelle is keeping too many secrets. But what happens when this paranormal investigator befriends a demon? Meeting Nequam  complicates everything  Now people are dying.
When she reaches out to Sam Castellano, she’s met with skepticism. He thinks she’s delusional, or lying, but he’s determined to find out which.


Danger is closer than either of them know. There’s more than one predator watching.

In the next couple of weeks, I will be running a contest. The prizes will be copies of CHASING MONSTERS and bookmarks, so watch this space for more info.

Thanks to all of you for being more patient than me. I hope you love it!

Posted by Thoeba at 5:59 PM No comments: Links to this post