Slave to the Furballs

A good friend once told me that when he dies, he wants to be reincarnated as one of my cats. Of course I laughed. He's just as obsessed with his cats as I am. And every bit as much of a mush as me.

But Spartacus Jones has got me thinking...Am I a Cat-Mom? Or a Cat-Slave?

When we got Freya, we knew we were being manipulated. She made it very clear to us that she didn't want to be in that alcove with the other cats, and that she wanted to come with us. She purred, she nuzzled and gave us sad eyes when we almost left. She was a determined kitty, and she's had us both under her paw ever since.

She has her own favorite spots, her favorite foods, foods she WON'T eat--which must be replaced with something different, specific places to eat and specific cuddling preferences. She's like Hitgirl. She never plays.

I thought she was just a particularly smart and strange cat, and we were gullible because she was our first kitty.

Spartacus Jones isn't as smart as Freya, but I think I've underestimated him.  He was SUPPOSED to go to the Humane Society when we found him. Then he made a sneaky, adorable bid to stay that completely suckered us (Mostly me) into keeping him.

Now I wake up between 4:30 to 5:30 a.m. every morning. That's when Spartacus Jones swats lovingly at my nose until I get up and feed him the wet stuff. (Oh--and I alternate the flavors of the wet food--so their palates don't get bored.)  If I don't? He pokes at  Freya. Who, as I mentioned, never plays. Swats to the nose? Or constant hissing and growling from Hitcat? If I shut him outside the room? He cries like he's starving to death. There's dry food, Sweetie. Can't you just eat the fucking kibble?

He's decided he likes brushing. A lot. Every time I walk past the table, he jumps on it, and lounges suggestively. Brush me. Brush me! BRUSH ME MEOW!

I've decided all his demands on my time are for meditation purposes. When he demands that I brush him, I do it, and he rewards me with purrs and cute faces, and gives me  direction on where to brush him next. When he tries to lure me downstairs for his own prefered cuddle time, (That's his territory) I tell myself it's not so cold, and there's not that many spiders and capitulate. I mean, he's just so sweet. Plus I can get some laundry done, right?

When did this happen? How did I come to this? A weird woman (Okay, I was always weird--BUT) who baby-talks and caters to the whims of CATS? Sigh...I am a cat slave after all. 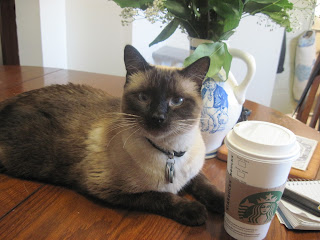 Here's a photo of our late boy, Sully. This is the face that destroyed the rule of 'no cats on the table'.I couldn't resist him. Sigh...
Posted by Thoeba at 10:42 PM 4 comments: Links to this post

Miffed but in Denial 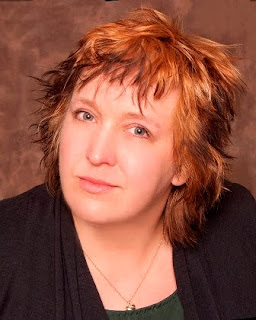 Yeah...I think that's how I feel. I should probably be more miffed, but I'm sure the denial helps with that.

It seems that a certain publishing titan is removing reviews based on the fact that the author 'knows' the review writer. Sounds silly, doesn't it?

I mean, isn't that the point of networking? To reach your readers, bloggers and other authors? Isn't that the reason we do blog tours and create author pages? To get people to buy our books, read them, and write reviews? Incidentally, here's a link to my author page: Donna Milward, Author

It's actually been going on for some time, but I've been reluctant to comment on it, because I don't want to bite the hand that feeds me.

It doesn't make any sense. Writers work hard to connect to people in order to entice them to buy our books. I am still a firm believer that if a reader likes an author as a person, they will like their work. So they like your page in order to connect back, and writers are being punished for it? Maybe we're supposed to wall ourselves off from humanity in order to write MORE?  Are they willing to do ALL our marketing for us? Most writers never even talk to all the people who follow them on social media. We're talking hundreds and sometimes thousands of people here!

I'm in denial, because I honestly believe this idea won't stand, and will soon be abandoned. If this titan uses algorithms to remove all reviews, then eventually there will be precious few reviews left for any author. And that's bad business. It's also about control, and that's a little scary. It's anti-community.

I think we should hold our ground. Write those reviews, and let our feelings about removed reviews be known. And you don't just have to review books on their site either. There's always blogs, Twitter, Facebook and Goodreads. Leave the titan in the darkness of Tartarus if it wants to be stubborn.

I'm going to go about my business as usual. I'm going to write, blog, and write reviews. I will support my fellow authors when I can, and talk to my readers. I'm miffed, but I'm hoping this will all blow over eventually.
Posted by Thoeba at 6:27 PM No comments: Links to this post