Earth to Thoeba: Fathering a Feminist

Earth to Thoeba: Fathering a Feminist: I adored my father. That much is obvious. Yet I was always under the impression that my father would love me more if I was a boy. Maybe it...
Posted by Thoeba at 7:13 PM No comments: Links to this post 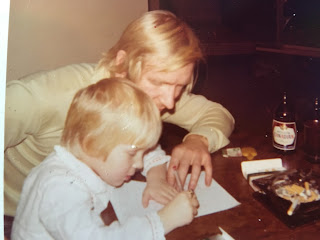 I adored my father. That much is obvious. Yet I was always under the impression that my father would love me more if I was a boy. Maybe it was because they were expecting a boy. They were going to name me Christopher Robin.

When I was five, I was given a black pair of Bauer hand-me-down skates. I knew they were boys skates, my Uncle David's first pair. It didn't matter. Daddy liked to skate, so I would learn how to glide across the ice like he did, no matter that I didn't have the same pristine white skates with toe picks that I saw other girls wearing.

I have a fantastic memory of my father swooping over and asking me what was wrong. "Daddy, I can't skate!" I wailed. He showed me how to push and glide, push and glide--it wasn't at all like walking, and I didn't have picks to help me push off. He took my hand, and together we surfed the ice until I let go. I did exactly as he showed me and suddenly, it was easy. Viola! "Daddy, I'm skating!" In later years when we shared that memory he remembered it differently. He remembered me letting go of his hand and saying, "I got it, Daddy." And off I went. Sure enough, his little girl could skate.

It's a common theme in my life, always wanting to please my father and be good at all the things he loved. Because I believed he would love me more if I was more like him. More like a boy. It shaped who I am in interesting ways.

He played guitar and loved music. I took up drums and learned how to read music. I learned to appreciate all music-- classical, jazz, folk...stuff that wasn't metal. He loved airplanes and got a pilot's license. I became his co-pilot and navigator. I read all the books he used for ground school, weather patterns, cloud formations and how to read flight instruments. Our family went to airshows and my father and I collected T-shirts of our favorite aircraft. I built model airplanes. He loved hockey, both my sister and I learned how to 'speak fluent hockey', and we have our favorite teams of course. I collected hockey cards, and learned the value of those too. I can no longer tell you what Goals Against Average means, but my sister still keeps up with everything from draft picks to playoff games.

Here's where the feminism comes in...When my parents bought an acerage, I made myself useful. There was a lot to do, and if I wanted to spend time with Dad, that meant tough chores. It meant clearing brush and taking down small trees. It meant rototilling the earth and gardening. And lots of weed whacking. Lots, and lots, and lots of weed whacking. With a gas-powered weed whacker, no less. Those things are freakin' heavy.

And I grew strong.

One day, he needed to bring a pallet of shingles to the roof. He had friends that volunteered to help, but Dad really just wanted to make sure it got done. Everybody seemed to be taking their time, and the roofers were going to be there in just a couple of days. So I helped him. This involved Dad hoisting a stack of shingles on his shoulder, and climbing a ladder. I stood on the roof, and grabbed the shingles from his shoulder by the plastic straps, and placed them in stacks. Such hard work! But it was worth it...After dinner, Dad's friends phoned. They were ready to help. I'll never forget how my heart sang when I heard my father say, "No, it's all finished. Me and my ah....daughter got it done." I could hear his pride. I saw it in the way he lifted his heels just a little when he said it.

We both hurt like hell the next day, but I was chuffed. From that day forward, I felt like I could do anything. I was strong and hard working. My father was proud of me. I'd heard him bragging about me. I'll never forget it.

That was the day I realized I could take any job, and work every bit as hard as a man. I realized my power and I was determined that if I worked like a man, I deserved to be paid like one, I deserved to be given the same opportunities, and I deserved fair treatment. My father believed in me. The best part? I did it. Just me. I didn't have to be a boy.

Looking back, I realized my parents raised a feminist all along. I realized my father simply never told me I can't. He never once said, "You're a girl, you can't/shouldn't do that." Not once. My parents just let me be myself, and I'm grateful for that. I like who I turned out to be.

I am a creative woman with a few odd interests and abilities and I am a good worker with a solid reputation. I'm that person, because my parents never told me, "You can't."


Posted by Thoeba at 7:09 PM No comments: Links to this post