Carry On Our Wayward Cat 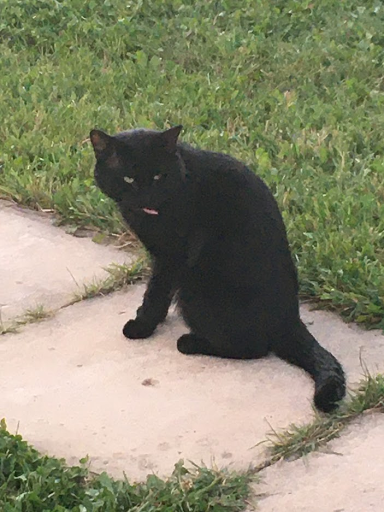 If you've read the previous post, you'll know we're trying to bring a stray cat we've named 'Grendel' into our household. A lot has happened since my last blog.
He got a bad infection in his leg. He came to our house very much later than usual, and when he did, he could not walk  He looked like a three-legged cat, and we made a decision.
We shut him in, and made him an appointment for the vet. He was so tired and so sick, he didn't bother fighting us.  He just hobbled downstairs to sleep.
As the night wore on, he growled, he pleaded, he lost the energy to argue. We did not let him out. The next day, I picked him up, intimidated by his terrible, monster growl-it's truly scary-But....He's all bark, no scratching or biting. I spent less than thirty seconds tucking him into a cat carrier. He didn't know what it was. He knew it seemed bad, but he didn't know how to fight it. Plus one leg didn't work right.
The vet gave him a shot of antibiotics, and he spent the next four days indoors with us. (Apparently, he's about two years old, and they gave him the birthdate of September 15, 2018.) That meant lots of love, lots of food and nip. Still he yowled and scratched at the door. Not wanting to stress him out, we released him after he stopped limping.

He didn't show up for a day and a half. I was relieved it was only that long. I expected him to disappear for three or four days and it felt like it. But he returned, and now we have a new half established routine.

I feel like I live with a teenager. Grendel stays out all night, coming home to eat like a horse before passing out in the basement. He wakes in the afternoon, wolfs his breakfast/lunch/whatever and disappears. I told my Mom about it and she was blunt. "Donna--That's payback." I cracked the hell up, but wow...I suddenly feel mighty bad for my mother. He stresses me out a bit.

But as I sit typing this, my heart sings. Grendel rests on the floor by my side. It gives me so much pleasure to watch him play with a honeysuckle stick. It makes me so happy to make him feel safe. It feels like love. And maybe he loves us enough to stay.

He just left to sleep the morning away downstairs. Typical teenager.

Edit: Yes, we still plan to get him fixed. He seems to know it too. His appearances have become random and unpredictable.
Posted by Thoeba at 5:13 PM