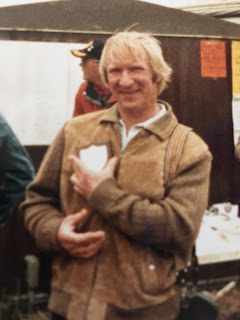 I was in a productive mood this morning. I've spent months on edits for 'Elaina's Fate' and today all I have left is the Epilogue.

This particular novel has been grueling. It's written in first person and present tense, which is completely different for me. Why did I do that? Because Elaina herself insisted. I tried my usual way, and it was clumsy and somehow felt wrong. No problem. It's good to try new things.

It seems to have taken me forever to get here, and I wondered why. How long has it been, anyway? About four years.

I remember the date, because I made a half-assed joke about Dad waiting a day to die so we could be sure it wasn't a prank. (He had a weird sense of humor.)

I remember shortly after dad died, I found it nearly impossible to write. Every time I did, I'd wind up crying, knowing I was writing a book he'd never read. Now here we are today. I'm finishing the last edits on a book he'll never read, and it hurts all over again.

But I am determined. I'm going to get things done today, even if If have to take a little break from the Epilogue. I'll get it done. But first I have to purge my heart, here.

As some know, my father was a recreational pilot, and had his own plane. This photo came from a Fly-in Breakfast he attended. Drayton Valley, I think, with his Piper Cherokee 140. Her name was 'Emy', because her call letters were CF-EMY.

A friend saw this photo and asked if I'd ever considered getting a pilots license. The short answer is yes, but I couldn't afford it and I'd never pass a hearing test anyway.

But the longer answer is: I never loved flying as much as my father did. My love was for airplanes themselves. I can't tell the different from one vehicle to the next on the road, but more often than not I can tell you what kind of plane just flew overhead.

Dad taught me the basics. I could, technically take off and land. (I've never actually landed a plane.) And I can steer a plane just fine. However, I find being in control of a chunk of metal hurtling through the air to be a stressful experience. I don't enjoy it. Sure as Hell don't want to spend big gobs of money on it.

Oh, and I also HATE turbulence. I also don't want to be in control of a hunk of metal speeding through random, unpredictable pockets of air.

So how about a story about turbulence with a dash of TMI?


It was the eighties. Dad had Emy, and she was a small, four seater low wing aircraft. I liked Emy, but her low wing design didn't handle turbulence well, and I often found riding with her often got bumpy.

I was a teenager at the time, knee deep in my Duran Duran phase. I wore a lot of black and white, and was rarely seen without my black Fedora. (The band wore them.) I also had terrible acne, which I was on medication to control. This medication could cause mild nausea. Yeah.

But it was a great day for a flight, so we were going up for a short jaunt to Whitecourt. Too bad the air was so rough. Ohhhhh, bouncy, bouncy, bouncy. And I'm starting to sweat. My father sees this, and no doubt he mistook my nausea for fear. He knew I didn't like turbulence.

So we go higher, so high the land looks like a green and yellow checkerboard. The air is so clear, we can see the Rocky Mountains off to the west. Dad tells me he figured the air would be smoother higher up, and he was right. Then he tells me how many thousands of feet up we are. I look down and count the ants on the highway. Ohhhh, my stomach.

The rest of the trip is uneventful. I hold it together, not wanting to freak out my dad or cause him to cut the trip short due to me not feeling well. Everything was fine until it was time to descend.

The turbulence had become worse as the day warmed up. Coming down made my guts feel like a Roadrunner cartoon. I could almost visualize my stomach hanging in midair before slamming back into place. Repeatedly.

I still thought I could hold it together. But as my father turned on final and throttled down, I knew I wasn't going to make it. I placed one hand over my mouth, and the other on Dad's shoulder. I watched his face transform from Happy Pilot enjoying himself to 'Óh shit, she's gonna blow.'

And chunks were blown. Hard. My father bursts into hysterical laughter. He's laughing so hard, I'm worried, as I'm spewing, if he can land the plane. But we make it on the ground, and my stomach is blissfully empty. My father is still laughing. He taxies down the runway, catching his breath long enough to yell, "You should of used your hat!" And he's off and running again.

Where was my Fedora, you ask? It was sitting on the back seat, right in front of the airsick bags I had no idea we had.

We get parked and Dad goes to look for some paper towel in the truck. He never stopped laughing. Not even a little bit. I stayed behind to assess the mess.

Here's the funny part. I didn't get any on Emy. There was no vomit on the dash, the seats, the steering column, not even on the seatbelt. I wore all my own barf. Yeah, Dad really appreciated that. So considerate of me.

The airport was only about a kilometer from home, thank God. Because Fox Creek airport had no amenities. I rode all the way home with a clean hat and vomit from my chin to my lap.

Dad snickered over that one for years. We'd go flying and he'd ask me if I needed a hat.

* For those wondering, Grendel is fine, but he needs to be in the cast for at least another two weeks. I do plan to write another blog for him.